‘You are in my veins, you fuck’ is a statement uttered by top model Kate Moss about her dramatic love affair with musician Pete Doherty. A relationship unfolding itself as a mixture of love, addiction and obsession. Such dark objects of desire and the duality of the seductive and the constrictive form the starting point of the exhibition You Are in My Veins. Set in public urban spaces rather than inside a dedicated art venue, the exhibition entwines itself into the fabric of Aarhus as an intimate, anti-monumental presence that is all about states of mind and affect. It takes the ephemerality, intensity and pathos of music as a major inspiration behind its form.

Read more about the works here:

You Are in My Veins is curated by Charlotte Sprogøe who has invited artists from Denmark and abroad to create new works for Aarhus, ranging from a theme song, music videos, film and sculptural installations to a performance concert. Each work reflects particular mental states, exploring the realms of the spiritual, the psychological and the hedonistic, creating variation on moods and tones throughout the inner city of Aarhus.

Aarhus is known as a Music City and, ever since a highly successful tourism campaign in 1938, as ‘Smilets By’ – the City of Smiles. With its many Michelin-starred restaurants, dozens of sidewalk cafés, picturesque boutiques and cobbled Latin Quarter, the city is an alluring mini-metropolis offering a wealth of pleasurable leisure activities for all visitors – whether from the local region or overseas. One of the distinctive hallmarks of Aarhus is its commercial, sleekly produced pop, but experimental alternatives also exist in underground scenes that cultivate chaos and a punk aesthetic. You Are in My Veins flows into this tension-filled field of attraction, clashes and stress common to every European metropolis today. From the university city’s extensive nightlife to spiritual romance lodged in its backyards, its Escape Rooms and psychotherapy clinics, the works are located where human emotions, energies and spiritual states are most powerfully condensed.

The exhibition begins even before visitors arrive in Aarhus: passengers on the Molslinjen ferry will see one of its works on the onboard info screens. In the city itself, the display opens with a work created for Dokk1, the brightly shining beacon of the city’s prestigious architect-designed waterfront. It continues into the downtown Latin Quarter, calling in at Kvindemuseet/the Women’s Museum and further into the (formerly) countercultural areas found in the streets of the Mejlgade neighbourhood. 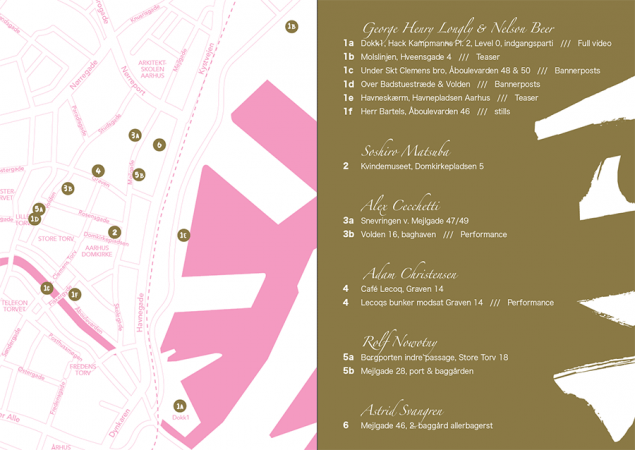 You Are in My Veins will open in conjunction with the Art Weekend Aarhus festival, which runs from October 4th to October 6th, and will remain on display throughout the autumn from October 4th to November 17th. The exhibition is created at the behest of Kunsthal Aarhus, Galleri Image and the Aarhus Center for Visual Arts (AaBKC), joining up here for the first time ever to launch an internationally based exhibition in the urban spaces of inner-city Aarhus.